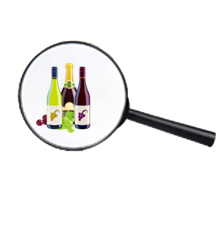 Dessert wines enhance the after-dinner experience. While some can be enjoyed on their own, many are best when paired with food. Pairing wine to enhance the dessert and vice versa can be fantastic experiences. Classic pairings for these wines include strong or salty cheese, nuts and charcuterie. Remember all wine pairings go better when the wine is somewhat sweeter than the food or the wine will taste sour!

Barolo Chinato [key-nah-toe’] is an aromatised Italian wine, like vermouth, it’s made by adding a maceration of herbs and spices to wine in this case Barolo (Nebbiolo) wine. Chinato takes its name from China, Italian for Cinchona Officinalis, the native South American tree from which quinine is extracted.  Chinato makes a great paring with butter cookies, vanilla ice cream, cocoa dusted almonds and  not too sweet orange chocolate desserts.

Ruby Port is a fortified Portuguese wine. It is a fresh and less complex Port wine style, deep red in color and with sweet flavors of red fruits. It is a blend of red grapes. The six most widely used grapes are Touriga Franca, Tinta Roriz, Tinta Barroca, Touriga Nacional, Tinto Cão and Tinta Amarela. The blend is fortified with a neutral grape spirit to stop the yeast before fermentation is complete and all sugars have been converted into alcohol and aged no more than three years in wood to maintain its fresh flavor and brilliant color. Enjoy Ruby Port as an aperitif or after-dinner drink. It’s a great pairing with nut, coffee, chocolate or caramel based desserts. Reserve Ports are a superior version of Ruby Ports with bottling aging. These wines are a blend of harvest but do not need decanting.

Vintage Ports are Ruby Ports made from grapes of a specific superior year’s crop. They only aged for 2-3 years in a barrel and when young need substantial bottle aging before being ready for consumption. They are dark in color and fresh in taste, like Ruby ports but more complex.

Late Bottle Vintage Ports (LBV) are lighter than Vintage Ports and are usually aged 4-6 years in a barrel and ready to be consumed when released.

Mavrodaphne (aka Mavrodaphne, Mavrodaphni / Mavrodafni) is a red wine grape variety grown in the Greece. The grape is at home in the vineyards around Pátras, found in the Peloponnese region of Greece. The grapes are dark-skinned, highly aromatic and powerful. It is best known for producing sweet fortified dessert wine, not unlike Port though it is sometimes used to produce dry wines. The name itself is Greek for “black laurel. To produce Mavrodaphne of Pátras, the fermentation begins in large, sun-exposed vats. Fermentation is stopped by the addition of a neutral grape spirit, distilled from the wine of previous vintages. The grape distillate is also high in alcohol, creating a higher alcohol-by-volume (ABV) than can be achieved naturally. What follows than, is the solera system of aging and blending as in Sherry production.

Tawny Port, like Ruby Port, is a fortified wine made from a blend of red grapes. It is a fortified wine originated in Portugal, but is now produced in other winemaking regions, including California and Australia. It is fortified with a neutral grape spirit to stop the fermentation is complete and all sugars have been converted into alcohol .The six most widely used grapes are Touriga Franca, Tinta Roriz, Tinta Barroca, Touriga Nacional, Tinto Cão and Tinta Amarela. Tawny Port, as opposed to Ruby, is exposed to a controlled amount of air while being aged in wood, so that it loses redness and oxidizes to a golden-to-brown hue. Aged Tawny Port is labeled by the number of years it has aged, typically from 10 to 30 but as high as 50. Confusingly, some are labeled “Fine Ruby”.  It is generally drier than younger Ports, and has rich complex flavors of nuts and dried fruits. It’s a great pairing with nut, coffee, chocolate or caramel based desserts. Also try M&Ms and Pumpkin pie!

Vins Doux Naturels (VDNs), or naturally sweet wines, have a long history in Southern France. Roussillon remains the region producing a majority of the VDNs in France today. Similar to Port, VDNs are fortified with a neutral grape spirit to stop the yeast before fermentation is complete and all sugars have been converted into alcohol. The final alcohol level varies depending on the regulations of the AOP in which it is produced, although most have a minimum required content of 15% abv but often no higher than 16-17%. It is produced in several key AOPs including; Banyuls (Grenache), Maury Doux, Rivesaltes, Languedoc-Roussillon Muscat, Muscat de Beaumes de Venise and Rasteau. They all have unique styles and VDN is most often a blend Muscat grapes, but several other grapes may be used. It’s a great paring with nut, coffee,  or caramel based desserts. Banyuls with it’s flavors of coffee, chestnut, mocha & tee is the best with chocolate and chocolate-based desserts.

Madeira is a fortified wine produced and bottled in Madeira, a Portuguese island off the coast of Morocco using specific grape varieties, and aged by the unique heating system. This fortified wine is virtually indestructible. It is typically a single varietal wine, with each white varietal representing one of the four most important styles of Madeira in increasing sweetness; Dry (Seco), Medium Dry (Meio Seco), Medium Sweet (Meio Doce) and Sweet (Doce). (measurements are in grams of sugar per liter).

Madeira Wines are also divided in two categories: the ones that bear a generic age, also known as Blends and those who were produced from one single grape variety, and from one single harvest, which can be Colheita or Vintage. Today, all wines have between 17.5% and 21% alcohol strength. Madeira is a great paring with nut, coffee, chocolate or caramel based desserts. Also try Almond Joy!

Marsala is a fortified wine, dry or sweet, produced in the region surrounding the Italian city of Marsala in Sicily. It is made using a process called in perpetuum, which is similar to the solera system used to produce Sherry Marsala and contains about 15–20% alcohol by volume. Different Marsala wines are classified according to their color, sweetness, and the duration of their aging. The three levels of increasing sweetness are secco, semisecco and sweet. The color and aging classifications are as follows;

Marsala wine was traditionally served as an aperitif  between the first and second courses of a meal. Contemporary diners will serve its drier versions chilled with Parmesan , Gorgonzola, Roquefort, and other spicy cheeses, with fruits or pastries, and the sweeter at room temperature as a dessert wine.

Muscat aka Muscat of Alexandria/Moscatel (Spanish) aka Zibibbo,  is a particularly aromatic white grape variety, with citrus, flowery, grapey flavors. It ripens to high sugar levels and is ideal for making sweet, fortified wines. Two regions of Portugal are famous for sweet, fortified Moscatel: the Douro and the Peninsula of Setúbal, across the River from the city of Lisbon. Its distinctive aroma is really easy to recognize including fresh grapes, raisins, lemons, lychees, pears and lime flowers. It has good, fresh acidity. It can also make light, summery wines, dry or off-dry, or, more often, sweet, fortified wines, most famous of which is Moscatel de Setúbal with its flavors of orange zest, honey, spices, iodine, orange blossom and acacia. Constantia is a famous Muscat based wine from South Africa. It is reported to be the longest continually made wine in the world.

Sherry (Spanish: Jerez [xeˈɾeO]) is a fortified wine made from white grapes that are grown near the city of Jerez de la Frontera in Andalusia, Spain. Sherry is produced in a variety of styles, made primarily from the Palomino grape, ranging from light versions similar to white table wines, such as Manzanilla and Fino, to darker and heavier versions that have been allowed to oxidize as they age in barrel, such as Amontillado and Oloroso. Sweet dessert ones are also made from Pedro Ximenez or Moscatel grapes, and are sometimes blended with Palomino-based Sherries. After fermentation is complete, the base wines are fortified with grape spirit in order to increase their final alcohol content.

Wines designated as Fino and Manzanilla are fortified until they reach a total alcohol content of 15.5 per cent by volume. As they age in barrel, they develop a layer of flor, which is a  film of yeast on the surface of wine that helps protect the wine from excessive oxidation. Those wines that are classified to undergo aging as Oloroso are fortified to reach an alcohol content of at least 17 per cent. They do not develop flor and so oxidize slightly as they age, giving them a darker color. Because fortification takes place after fermentation, most sherries are initially dry, with any sweetness being added later. Wines from different years are aged and blended using a Solera system ( a system to blends multiple vintages) before bottling, so that bottles of sherry will not usually carry a specific vintage year and can contain a small proportion of very old wine.

The best parcels in Montilla (especially in the zones Sierra de Montilla and Moriles Alto) also lie on albero, as albariza is called locally. The big difference is that the vast majority is planted with Pedro Ximénez grapes, used for both sweet and dry wines, rather than the Palomino Fino which is dominant in the sherry region. In general this is regarded as a slightly courser grape which holds more sugar. Therefore the juices have a higher potential in alcohol contents and a lot of wines that need fortification in Jerez, can be produced in Montilla-Moriles without fortification (especially the dry types). Other white grapes like Moscatel, Airén or Verdejo are also allowed.

The wines are categorized in the same way as sherry: there is Fino, Amontillado, Oloroso and of course sweet Pedro Ximénez, the style on which the region built its fame. It is made from grapes that are partially dried in the sun before pressing.

There is an important interaction between the two regions when it comes to Pedro Ximénez wines. Nowadays virtually all of the wines used to refresh the PX soleras in Jerez, El Puerto and Sanlúcar are produced in the Montilla-Moriles region, as there is very little Pedro Ximénez grown in the sherry region. The rules of the D.O. Jerez even have an exception for this practice, so PX wine from Montilla can legally be called PX sherry after spending at least two years in a bodega in Jerez. The underlying reason is the fact that Montilla-Moriles has better conditions to make this type of wine. It is more inland and has a lower humidity. If grapes are left to dry in the sun around Jerez, there’s always a risk of rotting when the humidity sets in at night.

Most of the wines in Montilla-Moriles are produced by the system of soleras and criaderas, although the concept of vintage wines or añadas is still more common there than in Jerez. Especially Pedro Ximénez wines are often sold with a vintage indication. Some of them go back a long time, e.g. Bodegas Toro Albalá currently have vintage wines dating back to the early 1900s.

Fino and Amontillado from Montilla-Moriles also mature under a layer of flor, which grows more slowly and stays thinner than in Jerez because of the distance to the sea. It gives similar characteristics to the wine, but as it’s less vigorous and consumes less of the glycerol, a Fino from Montilla-Moriles will generally maintain more of its body and structure. This also makes it appear a little fruitier and sweeter than a Fino de Jerez and makes them reach a higher age.

The fact that they are able to reach 15% of alcohol without additional fortification has some mixed results. Some say it adds to the complexity of the wines. Others prefer the spikey intensity of fortified Jerez wines, which is replaced by a more mellow profile in Montilla wines.